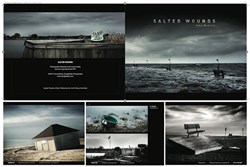 Noted Long Island photographer Amy Medina is publishing a photo book on the destructive effects of Hurricane Sandy on the beaches and structures around New York City and Long Island, NY. The book chronicles the aftermath of the storm on the natural and man-made landscape of the downstate area of New York in poignant, emotionally charged images taken throughout the area immediately following the “Super Storm of the Century”.

“I love where I live,” Medina said. “I am a true New Yorker at heart, and was affected deeply by the damage I saw around the area after the storm.”

Hurricane Sandy was dubbed a “Super Storm” as the hurricane hit the New York/New Jersey area at the same time as another storm front and coincided with normal high tides. Causing massive flooding that forever changed the natural landscape while destroying beaches, homes and businesses from Manhattan to Montauk, thousands of residents lost their homes and businesses and over a million more were without power for weeks.

Hurricane Sandy’s storm surge hit New York City on October 29, 2012 flooding streets, tunnels and subway lines and was the second-costliest hurricane in United States history (after Katrina in 2005). The largest Atlantic hurricane on record, with winds spanning 1,100 miles, Sandy was the deadliest and most destructive hurricane in recorded history. According to reports compiled on Wikipedia, estimates as of June 2013 assess damages to have been over $ 68 billion with at least 286 people killed along the path of the storm.

The new photo book by Medina, “Salted Wounds” is currently being offered for pre-sale and is expected to be available for delivery as both an eBook and a softcover 9-inch by 7-inch “zine” packaged in a comic-book style sleeve this October. The photographer is offering the book in various formats as low as $ 7 for the eBook and others that include limited edition autographed prints at http://www.indiegogo.com/projects/salted-wounds-hurricane-sandy-photo-book

One of Medina’s images has been selected as the Cover Photograph for the International Center of Photography and the Museum of the City of New York’s “Rising Waters” exhibition on Governor’s Island. The show features photos from Hurricane Sandy and will run through the end of September. Drawn from an open call for submissions from the public that drew over 5,000 entries, the exhibition includes 100 works by more than 90 professional photographers, community members, and bystanders who photographed the effects of the devastating storm and the subsequent recovery efforts.

Medina will be donating partial proceeds of the book sale to The Robin Hood Foundation, which has already granted millions of dollars to many worthy organizations helping people impacted by the storm.

“They do great work,” Medina said. “They have assured me their Hurricane Sandy grantees will continue to receive money as long as donations are coming in.

Lifelong Long Islander Amy Medina, also known online as “DangRabbit, is a local photographer and professional graphic artist. In addition to a deep love of the beaches of the area, she has a strong passion for photography, and has been doing a Picture-A-Day (PAD) Project since July 2009 — over 1500 days straight. In her PAD project, Medina is committed to taking and publishing a photograph every day from around the Long Island home she is so passionate about. Like many who live in the area, she was affected deeply by the damage she saw in the wake of the storm and sees the publication of “Salted Wounds” as a way to chronicle her deep love of the Long Island and New York City area. More of Medina’s work can be seen on her website, DangRabbit.com