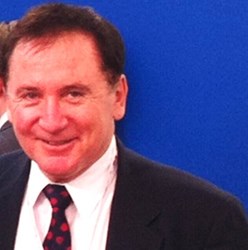 Amulet Technologies, a recognized leader in graphical user interface (GUI) solutions for embedded systems, is pleased to announce the recent promotion of Paul Indaco to his new position of CEO and President of Amulet Technologies.

“As the Vice President of Sales and Marketing, Paul led the efforts in establishing Amulet as a major provider of HMI for embedded systems,” said Willy Borner, the company’s previous CEO and company co-founder.

“I am honored and excited to lead Amulet Technologies at such an important time in its history,” said Indaco. “Amulet is extremely well positioned to be a major player in providing smartphone like graphics to multiple vertical markets such as industrial, medical, and home appliance. With our talented team, intellectual property and market momentum, we’ll play a major role in the realization of the ‘Internet of Things’.”

Prior to joining Amulet, Indaco was the Executive Vice President of Worldwide Sales at Achronix, where he was instrumental in securing VC funding and establishing their sales channel. He was equally successful at Actel, serving as VP of Worldwide Sales where he managed a team of over 70 sales and field applications engineers to drive over $ 4B in FPGA sales. Other executive sales positions he held were at Chip Express and LSI Logic Corporation. He has also held positions in product marketing and engineering at Intel Corporation and Texas Instruments.

This allows for the many design iterations that are required to create the most dynamic user experience possible. Amulet’s Graphical OS™ includes a set of behaviors and functions that eliminate the need for expensive graphic libraries and tedious programming.

Amulet’s production solutions include fully-integrated modules, controller boards and chips which can be implemented in a wide range of applications. Visit Amulet Technologies online at http://www.AmuletTechnologies.com.