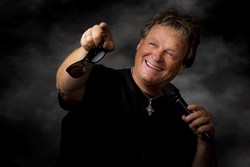 An eclectic group of Gospel and Christian artists will share a Seattle-area stage to celebrate friendship, common musical influences and their shared faith. The August 16 and 17 concerts featuring Bryan Duncan, Bob Carlisle, Tata Vega, Yvette C. Williams and Tony Hooper will be recorded on broadcast-quality video and multi-track audio.

Duncan has released 14 solo albums, three with the NehoSoul Band and six with the Sweet Comfort Band. He has sold in excess of 1.2 million records and videos. He’s had 16 No. 1 Christian radio hits.

Bob Carlisle is best known for his song “Butterfly Kisses,” which sold more than 2 million copies, was a number one song on Adult Contemporary radio, won a Grammy Award for Best Country Song and a Dove Award for Song of the Year.

Tata Vega released four acclaimed Motown albums and sang the part of Shug Avery in the motion picture The Color Purple before becoming a renowned session and background vocalist. The new film “Twenty Feet From Stardom” explores the lives of Vega, Darlene Love, Merry Clay, Lisa Fischer and Judith Hill – some of the world’s most notable background singers.

Tony Hooper is music pastor and a founding member of Blues Counsel, a Delta Blues band that is popular on the Christian festival circuit. He is a featured artist and musical director for the Aug. 16 and 17 concerts, which will be held at ExperienceChurch.tv, an innovative, high-tech church in Puyallup, Washington.

Duncan invited Carlisle, Vega, Williams and Hooper to record with him, each artist doing live versions of their own music and songs from the 60s, 70s and 80s that influenced them, including a tribute to Andra