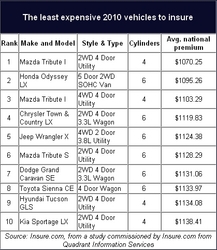 Insure.com’s annual ranking of average car insurance rates reveals that the Porsche Carrera GT2 two-door coupe is the most expensive vehicle to insure among 2010 models. A 40-year-old male would pay a national average of $ 2,943.78 for car insurance annually and that’s assuming the driver has a good driving record.

The profile of the average person who drives a particular model has great influence on the premiums for that vehicle. Costs for collision and comprehensive coverage are based on the model’s “loss history.” For example, small cars that are often driven by young, inexperienced drivers tend to be more expensive to insure. Car insurance rates also tend to rise with horsepower.

The Least Expensive 2010 Vehicles to Insure