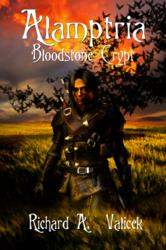 With an adjusted format and new title, Alamptria 1: Bloodstone Crypt is now available for purchase. One of the most unique genre novels ever written, Richard A. Valiceks tale weaves together complex plots, dynamic characters, and non-stop action that has reviewers raving. The novel, under its original 2011 release, also won the Buzillions Reviewers choice award.

In the 18th century, vampires convene to plot their takeover of the human race. In the peace-loving medieval kingdom of Elysium, the royal sons, knights who have been imbued with extraordinary powers by Grongone the wizard, gather their military forces, an assortment of magical creatures, and their will to survive and protect their people as they journey to Mount Drone to fight against the undead forces. It becomes a race against time when the fianc