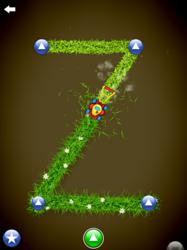 This week, the educational app LetterSchool snagged a position in the top 10 on the American and Canadian iTunes iPad Education charts. In the Netherlands, the Dutch version has held a steady position in the top five since the softwares launch in March. LetterSchool has also reached the top 10 in Belgium and Egypt, and the app is steadily approaching this magical boundary in other countries. Strikingly, the writing app for children is also regularly keeping Angry Birds company in the overall top 100 Paid Apps in several countries. (LetterSchool chart summaries: http://appslists.net/app/141340/LetterSchool; Dutch version: http://appslists.net/app/164429/LetterSchool-NL.)

LetterSchools enviable position among the App Stores top 10 is reason to celebrate for Boreaal Publishers, the Dutch company behind the app. Reaching the top in several countries is an impressive achievement for this tiny newcomer to the apps market, particularly since the App Store is overcrowded with alphabet and tracing apps. Despite the plentiful competition, LetterSchools creators felt they had something valuable to add, and in doing so hoped to raise the bar for this type of app. It seems theyve succeeded: the continuous highly positive response from parents and teachers underscores LetterSchools important role as an innovator in handwriting instruction.

LetterSchool lets kids have fun while they practice the complex skills of handwriting. The methods educational value is strongly appreciated by parents, teachers and therapists. The handwriting app have has already been introduced into many homes, schools and therapy practices all over the world. LetterSchools wide variety of games captures the attention and keeps players practicing their letters and numbers, over and over again. That probably explains the apps success, despite the fact that handwriting isnt exactly a trendy subject. By spending $ 2.99 on LetterSchool, schools not only save money on expensive handwriting methods and software, but also on precious teaching time. A list of the apps awards and experts reviews is available at LetterSchool.com.

LetterSchool competes with advanced mobile games, boasting high-quality graphics, effects and animations at a level rarely seen in apps for young children. In order to make LetterSchool a rock-solid piece of software, the makers didnt just rely on their own experience in education, software development and computer graphicslittle experts tested the app thoroughly. LetterSchool is a universal application for the iPad, iPhone and iPod touch.

Install the free lite version of LetterSchool which will allow you to reach the gold level and test-drive the free-form writing game more quickly. Reporters can also request a promotional code for the full version. Feel free to ask for our media kit containing high-resolution artwork on the contact page of our website.

Overview of awards and reviews: