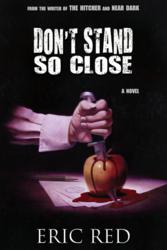 Plot Summary: When handsome 17-year-old Matt Poe moves to a rural town in Iowa, he is the new kid in school. An outsider who cant fit in, his only friend is his beautiful and sympathetic teacher, Linda Hayden. The older woman is the first to take an interest in him, helping him adjust to the community and keep his grades up. Matt cant help falling hard for Linda and what begins with a kiss becomes a torrid, secret affair. But his teacher is a lot more than he bargained for and the kids wildest dream becomes his worst nightmare. The only people who can save Matt are his two classmates, Grace McCormack and Rusty Shaw. But the three of them are in way over their heads against an evil adult trying to make sure they stay after class permanently.

About The Author: Eric Red is a Los Angeles based motion picture screenwriter and director whose films include The Hitcher, Near Dark, Cohen and Tate, Body Parts, Bad Moon and 100 Feet. He has had short fiction published in Weird Tales, Shroud, and Dark Delicacies III: Haunted. He was also the creator & writer of the graphic novel Containment for IDW Publishing. Dont Stand So Close is his first novel.

To pre-order on Amazon:

For more information about Dont Stand So Close or to order directly from the publisher, please visit the official Book Site: http://www.sstpublications.co.uk/dontstandsoclose