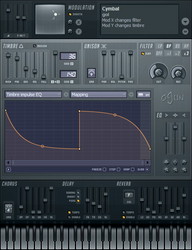 Sint-Martens-Latem, Belgium Image Line Software, the developer of FL Studio, has released its latest synthesizer, Ogun. Named after the god of iron*, Ogun is a powerful synthesizer for creating real metallic sounds, although it’s not limited to this genre. Ogun’s distinctive synthesis engine can generate more than 32,000 harmonics, modulated by ‘harmonic mapping’ functions, that hand tonal control directly to the user.

Ogun has been developed by the Chief Software Architect of Image Line Software Didier Dambrin. In the beginning Didier made a quick addiditve synth for the chimes, experimented with a “crazy” number of harmonics and as a result it created nice metallic sounds. This inspired him to built a totally new additive synth engine based on FFT (Fast Fourier Transforms) and to test it in combination with love philter, env controller, reverb and flangus.

“I found the experiment worked perfectly and made fantastic gong sounds. So knowing what the synth needed, I built the additive engine into the Sytrus architecture and removed the stuff that it didn’t need. That’s how Ogun was born”, explained Didier Dambrin.

The ‘Additive synthesis’ engine that lies is in the heart of Ogun creates complex waveforms by combining sine-waves of harmonic multiples of the fundamental frequency and generates 32,767 harmonics.

The Timbre section shapes the harmonic spectrum and controls change the weighting, or probability, that each harmonic in the spectra will sound.

One of the easiest ways to create new and complex timbres in Ogun is to use the resynthesis functions. Ogun can analyze an input sound and automatically recreate the timbral essence of the sound. Ogun can create unique harmonic mappings based on the start and on the end of the sample. By morphing between these harmonic mappings the original harmonic motion is reproduced.

Expressive performance is captured with the X-Y modulation window, freely assignable (to target synthesis parameters in Ogun) and can be quickly linked to any external controller.

Ogun can be used as a VSTi plugin. A FL Studio plugin version is in process of development.

Ogun can be ordered from the Image Line Software web shop for US $ 79.

*In Haitian Vodou and Yoruba mythology, Ogun is a god and orisha who presides over fire, iron, politics, hunting and war.