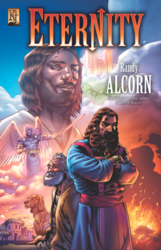 Comics are booming as well as Christian themes in entertainment, Kingstone CEO, Art Ayris said. Anywhere you want to lookTV and Internet shows, movies, books . . . The Bible as the No. 1 rated cable show, or the growing line of faith-based movies. Now why not comics? Randy Alcorn is a leading Christian writer, and now Eternity not only raises the bar but introduces Randy to a new demographic.

Our goal, Ayris said, is for Kingstone to eventually become the Marvel of the faith market.

Kingstone already is known for its ambitious 12-volume Kingstone Bible project; expected to be the most complete graphic adaptation of the Bible ever done and releasing in 2014.

Kingstone Comics distributes through major retailers such as Walmart and through CBA Christian book stores. Kingstone also leads in digital delivery of its comics via Kindle and graphic novels through top comic apps such as ComiXology, iVerse Media as well as the Kingstone Comics app on iPads and Droid devices.

Alcorn, known for the NYT best-seller Heaven and the award-winning Safely Home, also is the founder of Eternal Perspective Ministries, a non-profit dedicated to teaching an eternal viewpoint and helping the needy.

The 128-page, soft-cover graphic novel is available for pre-order; deliveries begin in June.