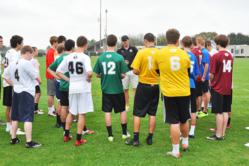 The National Camp Series (NCS) held a successful Championship Kicking Camp, for high school kickers, punters and snappers in Dallas, TX on May 19, 2013 according to retired NFL Kicker, and NCS founder, Michael Husted.

I really enjoyed the NCS Dallas Championship Camp last weekend, says Husted. It was great to coach at the camp with Darren Bennett, as well as see my good friend Mat McBriar. The talent in Dallas is exceptional and the NCS is fortunate to have Chris Shaw of KICKNATION as one of our top associates. Knowing Shaw works with kickers, punters and long snappers in the great state of Texas only ensures that the talent level there will always be one of the best.

Husted says the NCS Championship Kicking Camps are a new addition to the kicking camps series offered by the National Camp Series (NCS).

This full day camp is a nice addition to our National Camp Series which includes our Divisional Evaluation Events and our annual Super Camp, says Husted. This event included our proprietary Kicking Index Evaluation (KIX), professional instruction by NFL players and it will conclude with competition in field goals, kickoffs, punts and long snapping.

Go here for more on the upcoming NCS Championship Kickng Camp in Chicago on June, 22, 2013.

Husted, who kicked in the NFL for 9 years, says the Dallas Championship Camp is a great opportunity for high school specialists to get instruction from coaches of the highest caliber, and to be evaluated objectively.

Having the opportunity to get instruction by retired NFL players who have succeeded at all levels of football, be accurately and fairly evaluated using our Kicking IndeX (KIX) Player Rating System, and getting to compete will ensure that this camp will be the most comprehensive camp available, says Husted.

Professional instruction by retired NFL kickers and punters who coach specialists on a regular basis.

Competition that teaches you to manage pressure situations.

An opportunity to get selected for the US Army All American Game.

Husted says the goal of all NCS events, including the Dallas Championship Camp, is to help high school students develop their skills, and help position and prepare them to be, college athletes.

These Championship Kicking Camps are an integral part of the complete NCS system which objectively rates players for colleges and universities by utilizing its unique Kicking IndeX (KIX) Player Rating System, says Husted. Having collected data from our events over the past 10 years, our algorithm takes key variables into account when computing our ratings.

The NCS levels the playing field for those who don’t want to get caught up in all of the ‘politics’ that occurs in the kicking industry, says Husted. If you can kick, punt or snap, the NCS KIX system will let a young kicking specialists skills speak for themselves. No excuses. No explanations.”

Go here for more information about the National Camp Series.