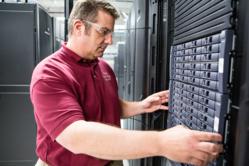 Diane Humphrey remembers the frustration two years ago as she sat with her stricken husband in the cardiac care center of the old St. Johns Regional Medical Center. His room was close to the floors station, where she heard nurses struggling to learn newfangled electronic records software installed by Mercy just weeks earlier. Id just want to say, Hit that button, sweetheart, she recalled.

She didnt know the digital records would save her husbands life.

Humphreys is just one of a myriad of stories from May 2011 when a massive tornado ravaged Joplin, leaving a path of destruction six miles long and a mile wide, more than 160 dead and thousands injured and homeless. The hospital suffered a direct hit from the EF5 storm; its ruined hulk became an iconic image amid the devastation.

St. Johns co-workers and volunteers evacuated 183 patients. Hundreds of newly injured streamed toward the stricken hospital, where nurses and doctors treated those they could in a parking lot and arranged transportation for others to facilities nearby.

Ripped from the hospital, old X-rays and paper files floated to the ground as far away as Springfield, some 70 miles distant.

It didnt matter. The Mercy medical records that counted were safely housed in a data center more than 200 miles away. It was technicians there protected by thick, windowless walls in a Mission Control-like room who were the first outside Joplin to know something was amiss at St. Johns. They say thats when the hospitals computers suddenly went offline.

Mercys data center had opened just months earlier in a blockhouse of a building in Washington, Mo., as the centerpiece of a $ 550 million investment Mercy made in electronic records. The early 2000s commitment put St. Louis-based Mercy and its hospitals in four states at the forefront of technical innovation. It was years before federal legislation would push other health care organizations to embrace the technology.

Through the past decade, the American Hospital Association repeatedly has named Mercy a Most Wired health care organization. The technology now fully links all of Mercys physician offices and acute-care and critical-access hospitals, with work continuing on those recently added to the health ministry.

Improving patient care and cutting costs primarily spurred the tech commitment, according to Scott Richert, a Mercy tech leader. We also knew it could help in the case of a disaster, he said. But nobody anticipated Joplin.

Soon after learning of the tornado, the tech team asked Mercy hospitals near Joplin to begin printing the hospitals records. Trucks carried the printouts to Joplin just hours after the storm to reunite health histories and medical records with patients sent to non-Mercy hospitals. Records came up instantly on computers for patients who landed at nearby Mercy hospitals.

Those included Lee Humphrey, 54. He and Diane, 59, had survived the storm by hiding under a stairwell at their apartment complex not far from St. Johns. The pacemaker implanted weeks earlier recorded how his heart stopped amid the terror of the tornado, and how the device kept him alive for 2 minutes, 41 seconds.

To maintain his health, Lee also needed medications that doctors had tweaked just days before the tornado. But the drugs and their records had blown away with their apartment, so the Humphreys sought help at several makeshift clinics in Joplin.

Things turned desperate the morning after the tornado, when Lee suddenly appeared weak and ashen. Lee had turned totally gray, Diane said. We had to get his medications, but nobody knew for sure what he needed.

An ambulance transported them to Mercy Hospital Springfield. His health care history had beaten him there as the electronic blips of a digital network. Those records saved his life, I have no doubt, Diane said.

The Humphreys, soon to celebrate their 20th wedding anniversary, are living at least temporarily in a small apartment in a Joplin suburb. Like many, theyve struggled to put lives back together after the storm. But they know many who have been through worse.

So the couple counts their blessings. Most important, Diane said, is that were both still here.