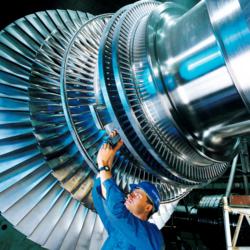 IEC standardization work is central to the global expansion of industry and economy.

When Hurricane Sandy struck the North-eastern United States, one of the world’s most technologically advanced societies, it brought home to millions how central electricity is to their lives.

In many countries, everyday services and amenities such as water supply, heating, transport and communications are taken for granted. That is, until a major natural disaster cuts offelectricity, bringing all other services to a grinding halt. At the global level, all links in the entire chain, from the generation to the distribution of electrical power to end users, rely on International Standards prepared by many IEC TCs (Technical Committees) and SCs (Subcommittees).

Electricity generation results from the conversion of mechanical or thermal energy from primary sources, such as fossil fuels, nuclear or renewable energies, into electric energy. This process requires different machines such as hydraulic, steam and wind turbines, or other systems, to harness solar or marine energy.

The fact that IEC TCs preparing International Standards for power generation, transmission and distribution were among the first to be created demonstrates the need for standardization in an industry that is central to the economic activity and prosperity of all countries.

Created in 1913, TC 4: Hydraulic turbines, was one of the first IEC TCs, reflecting the pioneering role played by hydropower in electricity generation. Hydropower is the primary source of renewable energy worldwide, representing 16% of global electricity generation in 2010, according to the IEA (International Energy Agency). Thanks to pumped storage facilities, it is also the main source of EES (electrical energy storage), making up 99% of the world’s capacity (see article on pumped storage in this e-tech http://www.iec.ch/etech/2012/etech_1112/tech-1.htm).

The IEC’s commitment to EES is illustrated by its decision in October 2012 to establish TC 120: Electrical Energy Storage Systems

From fossil fuels to new renewables

Two thirds of the worlds electricity are currently generated by burning fossil fuels, mainly coal but also gas. This requires the use of steam turbines in nuclear power plants and the exploitation of geothermal energy. Steam turbines are also used to generate electricity from biomass.

International Standards for steam turbines are prepared by TC 5, whose origins date back to 1927. Steam turbines have also been adopted in other domains such as integrated gasification combined cycle, industrial and petrochemical plants.

The share of electricity produced from non-hydro renewable sources is increasing rapidly; it is expected to grow more than seven-fold between 2010 and 2035, according to the IEA. This expansion is driven by environmental concerns and the volatile price of fossil fuels.

Stepping up and down

Electricity generated by power plants must be adapted for transmission and distribution. Transformers are used to convert a system of alternating voltage and current into another system of voltage and current, usually of different values. They are an important link in the electricity generation, transmission and distribution chain.

They are installed in step-down or step-up substations in which outgoing voltage from the transformers is reduced or increased in comparison with that of the incoming power.

Transformers are technologically mature products with a low rate of problems, indicating the overall adequacy of International Standards prepared by TC 14: Power transformers, which was created in 1939. TC 14 work covers “transformers with power ratings above 1 kVA single phase and 5 kVA polyphase”.

Power transformers are produced and procured widely across frontiers without problems. This trade relies on IEC International Standards, against which transformers can be purchased, manufactured, tested and inspected. TC 14 International Standards are adopted as national standards in many countries and used globally by utilities, consultants and project management companies as the basis for the specification of power transformers.

Demand is strong across the entire range of power and voltage, both to accommodate growing demand for electricity and to replace ageing units.

However, power transformers are not immune to failure, which is often caused by external factors. This was the case when Hurricane Sandy provoked the explosion of a Consolidated Edison transformer in a Manhattan power station on 29 October 2012. Such failures can paralyze entire distribution networks, as was the case then.

Electric power is generally produced some distance away from where it is needed. Proper distribution is therefore essential and relies on many systems such as wires, cables and various electrical accessories. Overhead conductors and lines, as well as cables of all kinds, are what immediately come to mind when power transmission is mentioned. Overhead electrical conductors are an essential link in the transmission chain.

The scope of TC 11 concerns the reliability of overhead lines and also deals with safety aspects, including the definition of clearances, tests on structures, foundations and fittings and methods of erection. It sees increased interest in EHVDC (extra high voltage direct current) transmission, possible surges in AC transmission voltages and new technologies in the construction of overhead lines as technology trends that will require more work.

TC 20: Electric cables, which first met in 1934, “prepares International Standards for the design, testing and end-use recommendations (including current ratings) for insulated electrical power and control cables, their accessories and cable systems, for use in wiring and in power generation, distribution and transmission”.

The not so obvious

Besides the most conspicuous installations and equipment such as dams, conventional or nuclear power plants, transformers and overhead lines and cables, the generation, transmission and distribution of electric power depends on many other vital additional systems and components that rely on standardization work from a variety of other IEC TCs.

The task of TC 8, System aspects for electrical energy supply, is to “analyze electricity sector evolution () and take the necessary initiatives to c