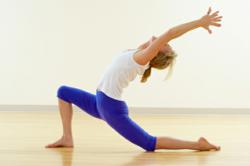 Euro Controls UK are selling hot yoga at home packages directly from their website. Customers can purchase specialist heaters and humidifiers that will create the correct environment needed to practice Hot Yoga, also known as Bikram Yoga. Bikram Choudhury created the concept of Bikram Yoga in the 1970s. 26 postures are performed in a room heated to 40 degrees Celsius. The postures are chosen specifically for the way they promote detoxification, stimulate vital organs and stretch muscles in a safe way. Its thought that just one 90 minute session can burn up to 600 calories as well as promoting mental well-being. Hot Yoga has become increasingly popular in the UK in recent years and hot yoga studios have been cropping up in every city. According to the daily mail, hot yoga was the key to Team GBs Olympic success.

Thanks to celebrity fans of hot yoga and plenty of special offers doing the rounds on daily deals sites, hot yoga has become one of the most popular forms of exercise in the UK. The hundreds of hot yoga studios around the major cities certainly dont struggle to fill their classes, and the cost of attending a class certainly reflects this. Classes in London cost anything from