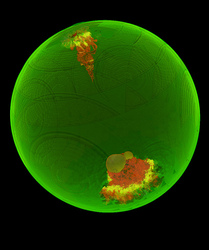 The awards were presented during the Scientific Discovery through Advanced Computing (SciDAC) conference held in San Diego. The top 10 winners were selected by the participants of the conference at the Electronic Visualization and Poster Night, held June 15.

“Visualizations provide an incredibly powerful way for scientists to gain new insights into complex problems,” said Mark Hereld, who leads the visualization and analysis efforts for the Argonne Leadership Computing Facility. “At Argonne, we are fortunate to have the expertise in software development and computation and the hardware resources necessary to make these visualizations possible.”

The Argonne winning visualizations were “Turbulent Flow of Coolant in an Advanced Nuclear Reactor” and “Simulation of the Gravitationally Confined Detonation (GCD) Model of a Type Ia Supernovae for Ignition at Multiple Points.”

Both the visualizations and the computer runs for the winning entries were done at the Argonne Leadership Computing Facility (ALCF). The computations were carried out on one of the world’s fastest and most energy-efficient supercomputers: Intrepid, Argonnes IBM Blue Gene/P. The visualizations were performed on Eureka with software developed at Argonne. Eureka is also located at the ALCF and is one of the world’s largest graphics processing units, providing more than 111 teraflops and over 3.2 terabytes of RAM.

The winning entries were carried out by teams supported by DOE’s Innovative and Novel Computational Impact on Theory and Experiment (INCITE) program, which awards sizable allocations of timetypically, millions of processor-hours per projecton some of the world’s most powerful supercomputers in order to address grand challenges in science and engineering.

The INCITE program goes beyond providing access to supercomputers. A key aspect of the program is to connect scientific and technical staff, enabling researchers to leverage Argonnes expertise in optimizing applications to scale successfully to an unprecedented number of processors to solve some of our nation’s most pressing science and technology challenges.

Over the past 30 years, the Department of Energy’s (DOE) supercomputing program has played an increasingly important role in scientific research by allowing scientists to create more accurate models of complex processes, simulate problems once thought to be impossible, and analyze the increasing amount of data generated by experiments.

The U.S. Department of Energys Argonne National Laboratory seeks solutions to pressing national problems in science and technology. The nations first national laboratory, Argonne conducts basic and applied scientific research in many major scientific disciplines. Argonne researchers work closely with researchers from hundreds of universities, companies, and federal, state and municipal agencies to help advance Americas scientific leadership, solve specific problems and contribute to the nations strength in the future. With employees from more than 60 nations, Argonne is managed by UChicago Argonne LLC for the U.S. Department of Energys Office of Science.