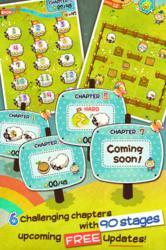 Flick Sheep!, the breakout new puzzle game from the devs behind Slice It!, appears ready to take on the App Store and garner as much praise as its predecessor. To tempt even more iOS puzzle lovers to try the game, the paid version of Flick Sheep! will be free for a limited time.

Flick Sheep! pits the player against the encroaching sunsetthe players defenseless sheep must be gathered together in safety before the light fades. To save these lovely little lambs, players will have to navigate the grid-like layout of the sheep pen. The early stages familiarize players with the way the sheep respond to swiping (adjacent matching sheep move in groups, for example), while the more advanced puzzles introduce other obstacles.

The game is a soothing exercise in intellect, enhanced by cheerful, pleasant graphics. It features a number of traps, including animal-arresting bubbles, and the sheeps farmyard friends also make an appearance. Flick Sheep! features 90 levels, with more to come, to give players plenty of gameplay. And GameCenter integration gives those with a competitive streak the chance to compare their rankings with others. Those who are more goal oriented will want to rack up the games 21 achievements.

Flick Sheep! is a steal at its usual price, and since its recent launch the paid version of the game has built a strong fan base. The current discount is guaranteed to catapult Flick Sheep! into stardom; its bound to become the newest game to dominate chit-chat around the water-cooler. Like the wildly successful Slice It!, Flick Sheep! presents a perfect combination of challenge and relaxation. The dev team behind the two games has more than proven their merit in the puzzle genre.

Flick Sheep! is compatible with iPhone, iPod Touch, and iPad, and available in English, Japanese, and Korean. Snap up the opportunity to vacation in this mind-teasing meadow, while the premium version of Flick Sheep! is available for free!